A Heartfelt Thank-You from ChazzTheDog 4.26.12

Paw waves efurrybuddy! It’s a gloomy Fursday here in SoCal, but I am still berry happy!

I want to mention two pals who did a berry nice thing for me, ChazzTheDog.

It was a blast. Lots of pals took part in all sorts of vehicles.  The course was filled with obstacles: Cattle Crossing, Kitteh Krossing and more.

So anyway, I was there at PitCrew Boss for KingTuttiFruitti, or KTF as he is known at his #NipClub.

There were quizzes & prizes and that is what  I want to mention now.

I wish to thank two of my pals, ToughTeddyBear & SeattleP.

ToughTeddyBear actually won this prize and decided to donate it to me!

Wow! When i asked him why he was doing that he said he wanted to do something unexpected, and nice to bring a smile to another pal;s face.

Isn’t that so cool!!! Thanks buddy . And SeattleP is the kitteh that donated the prize for the event and mailed it to me.

I lubs getting mail. AdoptedMom says sumtimes I get more mail then she does. BOL!! So are you ready? 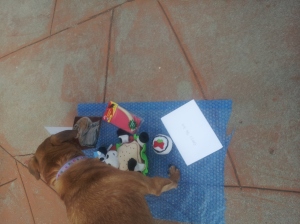 So that’s the end of my post for today. I really appreciate all the pals who took part that day, we had bunches of fun. And to ToughTeddyBear and Seattle P..well you two are da best!

Notice the card with artwork from CheshireKitten, cool!

Adopted Dog Mommy having an adventure with her new buddy, pal, fur-baby, Chazz the Terrier Shibu Ina mix.
View all posts by adoptedmom »