Do you want to see a picture of your furbabie here at Adopted Mom To Chazz The Dog Blog?

Well, Chazz’s Friends Gallery has more room on the walls; and we have a spot for your pet’s picture!  Just email a small JPEG, GIF, or PDF to:

adoptedmomtochazz@gmail.com – and we well get it uploaded quick as a wink.

WIN your own Pawtographed Copy - See GIVEAWAY to ENTER

A Word From Chazz & Adopted Mom

Blogging, MuttMania, GiveAways, Conferences & Travel, BlogHops, #NipClub….wow the last few months have been busy busy –and we are just coming into the Fall Season where things really start to heat up.

I just wanted to take a moment out to say how much fun and enjoyment both ChazzTheDog & me – Adopted Mom are having with the blog and all our new friends, both 2 legged & 4 pawed.

We like to think we are doing that here at AMTCTD.

If you have some thoughts or opinions on the subject –don’t hesitate leave a comment–we would love to hear from you!

Well okay I guess that’s it. And thanks for reading the blog.

Click on the Contest, Freebies, and GiveAway tab. Follow the simple HOW TO ENTER Steps 1,2, and 3.  Best of Luck!!! 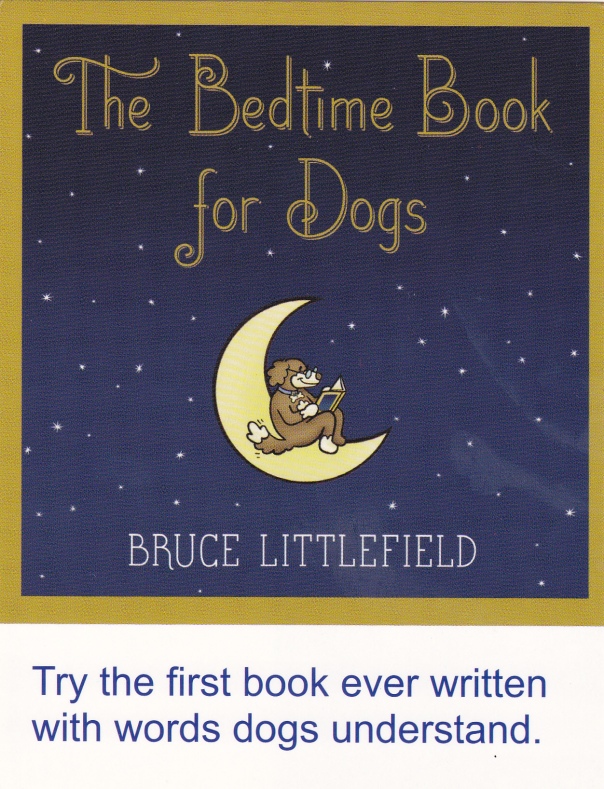 The average dog knows 167 words. Your dog is probably smarter than average.

Would your dog enjoy a good book before drifting off to doggie dreamland? Well, now you can read your dog a sweet story that will ensure those dreams are fun, fun, fun.

AdoptedMomToChazzTheDog Blog’s first ever GIVEAWAY is just around the corner. Author Bruce Littlefield wrote this book for his dog Westminster, but my dog Chazz enjoys it and I think your dog will too.

Look for How To Enter & Rules Soon!

Go to the Product Review tab to read my complete Book Review.

Hey Everybody, you might be looking for the details on the upcoming GiveAway…and they’re coming. But I want to finish telling you about BLOGPAWS2011. This was a really good conference. Let’s skip over to Friday Night (and I will go back for the education sessions and workshops.) Friday night the attendees of BLOGPAWS were treated to the ‘first press screening in the country for Disney’s Spooky Buddies” movie. Popcorn & Sodas to our hearts content; awaited us as we assembled and took our seats. Now this was unlike any movie I ever went to before; a much tougher crowd was on hand than usual – yep the 4-Paw kind. I have to tell you anytime there was some loud action on the big-screen, the dogs returned it with barking of their own. And immediately following that –  the ‘hooman’ audience was cracking up with laughter. I have to say it was all quite enjoyable. 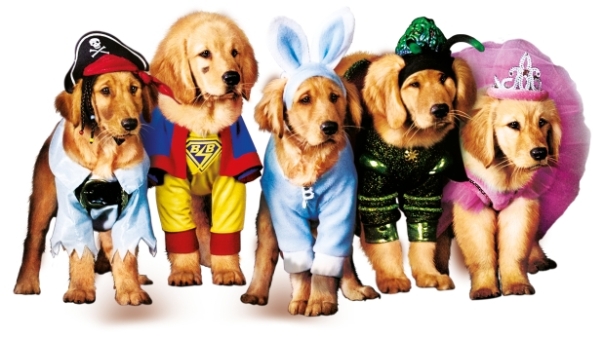 Together they team up once more and save the day in a Halloween story, sure to become a favorite for you & your young children. Just to whet your appetite here are a few stills from the production: 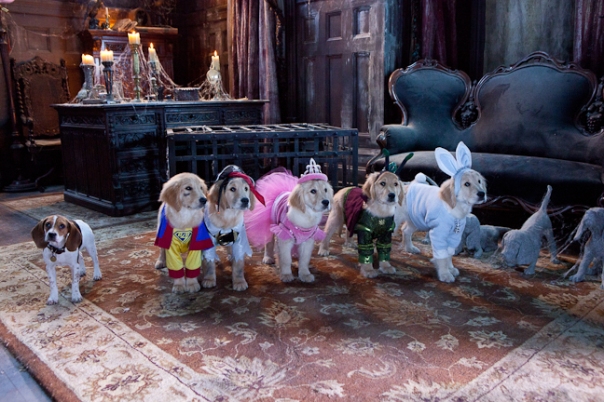 Don’t worry, these little girl & guys will melt your heart for sure!

The Buddies cooking up a plan to save the day!

Following the screening, there was a fun Q&A with Director Robert Vince, a drawing for an oversized Buddy Dog Stuffed Animal Toy, and a photo op with one of the animal stars of the film.

AdoptedMom’s Movie Review*: As I said to one of the Disney representatives/publicists,  who found me out in the lobby following the screening: ‘  Having no young children, I would not normally go to see any of  the pictures from this franchise –   so this movie was a surprise – Both entertaining and cute as a button.’ The story was fun loaded with heroes and villans, a doggie in distress that needed rescuing, and in a small town the struggle and ultimate triumph of good over evil .  Plus who can argue with a soundtrack that includes that classic novelty hit, Monster Mash, and a good, if not goofy character who goes by the name of FrankenDude!

Come on guys, buy this one for your kids when it come out on Blu-Ray. I guarantee they will want to watch it year after year. Psst, you might even sit down alone and watch it – ya know, just for fun.

*Attribution:  This review is my own personal thoughts and feelings about the movie. No person or entity influenced my views.

It’s Time For A GIVEAWAY

AdoptedMomToChazzTheDog.Wordpress.com is pleased to announce its’ first ever GiveAway!

Win Your Very Own Autographed (& Pawtographed) Copy of The Bedtime Book For Dogs.. the first book ever written with words dogs understand.

& Read Your Fur-Babies a Goodnight Story

Now let’s see, when I left off, well you know what I’m going to methodically go thru & review all of the different aspects of the conference.

I’m embarrassed to say, but I think the biggest questions on the minds of many of us attendees going into the reception was, “Is there going to be dinner? Do we need to make arrangements to get something to eat?” Never fear, the BlogPaws Event Team & The Sheraton Premiere had it covered! They did a fun “Mashed Potato Bar”. In a martini glass you got around 2 scoops of either white or sweet potato as a base. Then you went down the line and loaded up on toppings, green onion, bacon, broccoli florets, grilled or red onion, sourcream, quacamole, roasted peppers, & more. Yummy. After that they had salad fixings, some pasta, and dessert.

Let me go ahead right here and tell you the eatin’ was good all three days of the conference. It was tasty, artfully presented, and there was plenty of it. In the infamous words of my dear departed Grandmother, “If you left the table hungry, it was your own darn fault!” And for you cheesecake gourmets…well let’s just say there was fruit topped cheesecake, marble cheesecake, plain cheesecake, & chocolate cheesecake. Okay I guess it’s clear I like to cook & I like to eat. So sue me. I was raised to appreciate the time, money, and preparation that goes into putting a meal on the table–and unless you’ve got a real good reason – you better eat your food.

I’m going to stop here, and I promise the next installment will cover workshops, breakout sessions, exhibitors, etc. I just want you to get the full flavor of the experience, to the best of my blogging ability.

It took me awhile to get here, but look at it this way, an earthquake, Hurricane Irene, not even a cabin attendant dumping a cup of ice down me & my iPAD case could not stop me from reporting on the BLOGPAWS2011 Social Media & Networking Conference held August 25 – 27th at the Sheraton Premiere in Tyson’s Corner, Virginia. 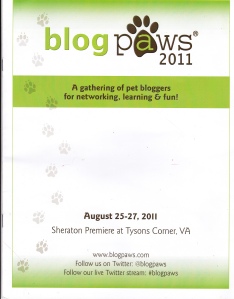 Two things need to be stated up front. First, a big salute and thank you again goes out to KURGO, who sponsored me, and without whom I wouldn’t have been able to enjoy the experience of attending the conference. Hip, Hip, Hooray. Second, this was some terrific event. Over the years of my work history I’ve attended conferences in other industries in New York for the Toy Show, in Chicago for Educational Toys, Games, Books, & Puzzles, etc…and I have to tell you that this conference matched those others in offerings, execution, information, logistics, and just plain old fun such that I would score it at a 9.5 out of 10!!! The Sheraton and their staff was fabulous. I was told that the hotel was completely taken over for the weekend by the conference with a few 60 or so other guests not involved with BlogPaws!

The facilities included a Grand Ballroom, where we had our meals, listened to the keynote speakers, and enjoyed a Disney movie preview for “Spooky Buddies. The Pavillons and MeetingRrooms where I attended various workshops and breakout sessions. The Exhibitor Hall where the sponsor booths and tables were located. The Exhibitor Lounge where you could sit & take a time out, put your feet up and enjoy a coffee or soda, talk with a vendor if you were lucky enough to arrange a meeting.

The hotel had a complete Vet/MD Tracker program going on at a lower level that honestly I did not get to tour. There were directions to a Pet Walk where you & your furbuddy could go for exercise and to take care of rest breaks (for the dog that is!)
Lastly, the BlogPaws Team thought to have an area called The Pet Park. This was a large meeting room equipped with water, dog toys, and volunteer pet sitters who took the dogs for walks, for potty breaks, and simply played with them in the room.

Now that you have some idea of the setup, logistics and such tune in for my next post to give you the flavor of the work I did there for KURGOexhibiting, demonstrating and talking about their award winning travel gear for dogs, as well as the education workshops I attended on the FTC, Contest/GiveAways, Copyrights & Trademarks, The Wonderful Widgets of Oz, and The Flat Pet Workshop.

I met so many new pet parents that I hope to turn into friends over the coming months…it was really a valuable trip, well worth any inconvenience, and I learned a lot.

Wow, I just don’t believe how busy I’ve been since returning from BLOGPAWS! Haven’t even had a chance to do my own posts about the trip. Trying to finish up all the reports, surveys, and other stuff I committed to doing.

Let’s see: Did MuttMania last Friday at Eagle Rock Farmers Market and made my booth rental back in 45 minutes. It was great. I think folks are beginning to get I am there & what I have for sale. Will be starting back up this Wednesday 4Pm – 8Pm with Silversun Farmers & Artisans Market over next to Target @ Eagle Rock Plaza. Plans for a bang up reopening are being put into place with food, jumpers for the kids, music on the community stage, etc. MuttMania will be there with all kinds of new goodies for your dog or cat. Come Check It Out – You wpon’t be disappointed!!!

I won a free registration to BarkWorld courtesy of Modern Dog Magazine. Thanx MDM, but it’s all the way over in Atlanta. Not sure I can swing the trip. But never fear…SuperZoo in Las Vegas is just around the corner. My friends from KURGO have a booth and I’m thinking about going up for the day. Haven’t been back to Las Vegas in years. A pet conference may be just the thing that gets me there!!!

OK, it’s Sunday and I want to hang out with Chazz The Dog and some friends….cya all later!