It looks like we have a pattern of reviewing this page on a yearly basis.

Chazz the Dog is doing well and he has turned 7 years old. He had a couple of minor issues we had to see the vettydoc about. But overall he is quite healthy.

Springtime in Los Angeles is lovely, sunny and beautiful.  Chazz and I go for his morning walk (going potty included) each day. Chazz enjoys the neighboring apartment buildings front lawn better than our own. The grass is greener with more spring.

I’m guessing, Chazz likes the feel of this particular grass under his paws. We are good neighbors, and we always pick up after ourselves. No poop left behind.  Those of you who have read other areas of this blog know Adopted Mom published a Letter to The Editor in the early days of the blog, on the subject of the pickup and removal of dog poop from  public areas.

Further, we have an announcement. A friend of Adopted Mom is going to be moving in and sharing the house with ChazztheDog and Adopted Mom. We are very excited about this development. Chazz’s crate stays in the bedroom where the friend will be staying . Adopted Mom mentioned this to the friend; and he said that Chazz will probably end up sleeping with him in the bed. So Chazz will be very happy about this turn of events!!

Let’s see what else? Adopted Mom is still working on her health issues taking her medicines and having her blood draws. She is staying out of the hospital ER and we are grateful for that.

Well, it’s been a long, cold, winter and we are guessing our readers are very ready for it to be over weatherwise! Southern California gets mild winter, but still cold is cold.

Chazz dressed up for Easter and we will post those images very soon. 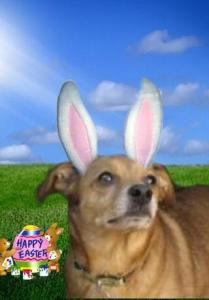 Chazz got his Bunny Ears on 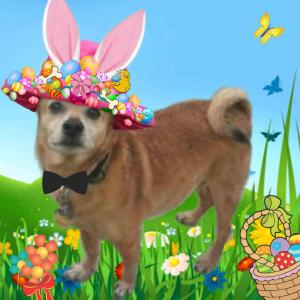 Chazz struttin in his Easter Bonnet

Chazz coming out of his shell 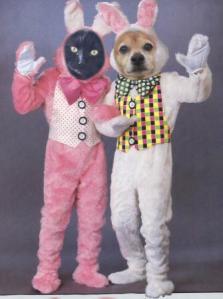 Thanks for checking in with us on our About Page . Don’t miss our latest Book Review of “Henry Says Hello”

Its been a little over a year since I last reviewed this page of the blog; so thought we were overdue for some freshening up:

Adopted Mom has just come out of a period of some struggle. Personal health issues dominated, and made it difficult to work on the blog, create interesting content, etc. So I didn’t. For a period of 3.5 months. Now that’s a long time to be away. Frankly I am grateful we still have readers, any amount of readers.

Some bloggers spend much time & energy on the analytics or stats of their blog. Building up numbers is a driving force. Well, AdoptedMom is not one of those bloggers- never has been. Adventures with ChazztheDog, Canine themed Books & Films, bringing information about cool products is and has been the emphasis of this blog.

As we complete the first quarter of 2014 we are staying that course. I don’t like a lot of obvious advertising, banner & pop-up ads are obnoxious & annoying. At one time I considered monetizing the blog. That is no longer an issue here. OH DON’T GET ME WRONG. I will continue doing Product Reviews, clearly a form of marketing/advertising. But we see those as bringing information to pet pawrents about what’s out there, what’s available in the marketplace. I think of that as performing a service.
We are doing Book Reviews, Film Reviews, Product Reviews, and GiveAways..stay tuned in for all the fun. And thanks for sticking around, and sticking withus. We appreciate it…

Update – December 2013
Earlier this month I celebrated a big birthday (don’t ask). So I am updating this page with a short BIO of me, AdoptedMom.

As a former Executive Administrative Assistant, I found myself writing for every manager I ever supported. When I was laid off in 2001 i decided to pursue my passion for writing and became a Freelance Ghostwriter. Yes, ghostwriter you read that right! That means I write for other people, under someone else’s name.

After that, I adopted ChazzTheDog, and he changed my life. I became a Pet Blogger, got involved in the BlogPaws Community, and met lots of new furriends!

Chazz & I live in a section of Northeast Los Angeles known as Eagle Rock. It is a wonderful community with cool architecture, stores, coffee houses, parks, schools, and art galleries. We love living here and my brother lives close by, an added perk! I attended both San Diego State University as well as UCLA for college.

I am originally from Massachusetts, and moved with my family to California at an early age. While both my parents have passed away, along with sadly a younger brother, I am grateful for my brother, sisters-in-law, my three great nephews, and my circle of very special friends.

Chazz has brought me so much love, loyalty, and affection I can hardly believe it.

Adopted Mom to Chazz The Dog

Chazz is a Terrier/Shiba Inu mix, 4 year old, neutered, male that I adopted only this past January 2011.  He has made such an impact on my life…I decided to create this blog to chronicle his & my adventures.  We live in a house in NorthEast Los Angeles, in a part of town known as Eagle Rock.  Eagle Rock is a lovely little town, where there is a wonderful mix of architecture, landscaping, ethnicities, restaurants, shopping, schools, and places to live. It is the home of Occidental College, where President Barack Obama attended for a time.

Chazz iz on Twitter with his furriends as ChazzTheDog. He is the newest Roadie for da Shibbering Cheetos Band.  He is also a member of the BadBoyzofTwitter (#BBOT), and most recently has joined the Sekurity Team at Nipclub. He is Cadet Chazz.

Chazz earned a promotion on the Nipclub Sekurity Team. He is now Officer Chazz.  Condogulations, way to go pal!!!

We have a local newspaper, The Boulevard Sentinel, that reports on all the local happenings. The thing I like the most about Eagle Rock is that it is the best combination of big city Los Angeles and small town ambience.  Please check back often to see what Chazz & I are up to and what we’re thinking.  Subscribe below to adoptedmomtochazzthedog.wordpress.com and follow our adventures.

NOTE:  All the writing and opinions on this blog are copyright property and may not be used or reproduced; except in the case of a Guest Blogger who retains the rights to their original material.

Attribution for images or text, other than that coming from the creator of this blog , is always labeled.

Thank you for observing this protocol.

I look forward to hearing from you,  &  promise to answer in a timely manner!