FRANKENWEENIE, Tim Burton’s Black & White, Stop Motion Animation, Full Length Feature is a family film, a delight for young & old. In its’ simplest terms it is a story about a boy, 10 year old Victor Frankenstein and his beloved dog Sparky. Victor & Sparky live with Victor’s Mom & Dad, in the suburban tract home town of New Holland. Immediately we are introduced to a cast of offbeat characters beginning with their next door neighbor Mr. Burgermeister, who is also the mayor of New Holland and his put upon niece, Elsa Van Helsing accompanied by her poodle Persephone. (Sparky’s love interest) Victor’s Teacher nee mentor, Mr. Rzkruski, the new Sciene eacher at New Holland Elementary, and an odd assortment of Victor’s classmates. Edgar E Gore, Nassor, Weird Girl & her strangely talented cat, Mr. Whiskers,Toshiaki, and Bob. Aided by a conglomeration of monstrous creatures they inhabit this world created in whole and in part through the imagination and vision of Tim Burton – leading teams of artists, puppeteers, modelers, set designers and builders, cinematographers, et. al. Academy Award winning composer Danny Elfman provides a musical score that catapults us back in time to small town America with a big nod to all the classic horror pictures of the 1940’s & 50’s.

The cast of talent lending their voices to these characters is all encompassing. Veteran actor Martin Landau brings Science Teacher, Mr.   Rzkruski to life with a Vincent Price-esque veracity.  Newcomer Charlie Tahan embodies Victor with the soulful innocence, yet knowing quality that Director Burton was looking for. Actress Catherine O’Hara voiced a trio of characters including Victor’s Mother, Weird Girl, and the Gym Teacher. Weird Girl particularly sounds extra spooky if not a little insane, sitting in the classroom uttering odd things along with pronouncements of dreams she has had about fellow classmates – and interpreting the signs from her equally weird cat.  Actor-comedian Martin Short lends his voice to another three characters in the film, Victor’s Father, Mr Frankenstein, cranky old Mr. Burgermeister, and Nassor, classmate of Victor, described as an “11 year old version of Boris Karloff.”  Elsa Van Helsing, the girl next door is brought to life by Winona Ryder, whom the character was based upon.  Child actor Atticus Shaffer, currently seen in the TV program The Middle gives his voice to Edgar E. Gore. Edgar is patterned after the late Peter Lorre. Well known character actress Conchata Ferrell (Berta on Two and a Half Men) voices classmate Bob’s Mom, with Robert Capron speaking as Bob.

As I sat in he El Capitan Theater watching the credits roll at the conclusion of the screening, I was amazed at the numbers of artisans, craftspeople, cast & crew it took to mount this production. But it’s easy to forget as you follow the story that these are lifeless puppets/models, brought to life at the hands (and voices) of this talented group.

While Mr. Burton gives a nod to the classic horror pictures of his youth, he admits the genesis for this work was based on a dog he had as a boy, and the relationship they experienced together.

Along with my fellow audience members, I laughed at the references to other well known movies, and was touched by the sad parts. But no spoiler alert here. We aren’t going to give anything away to lessen your enjoyment of the movie.

ChazzTheDog’s Comments: While I did not get to sit inside the theater and watch the movie; I did send my stand-in “Flat Chazz“. “I thought the dogs were realistically portrayed in the film, their doggie movements were spot on.”   RATING: 3.5 out of 4 Paws Up

Flat Chazz with Victor, Elsa, and Sparky puppets at the El Capitan 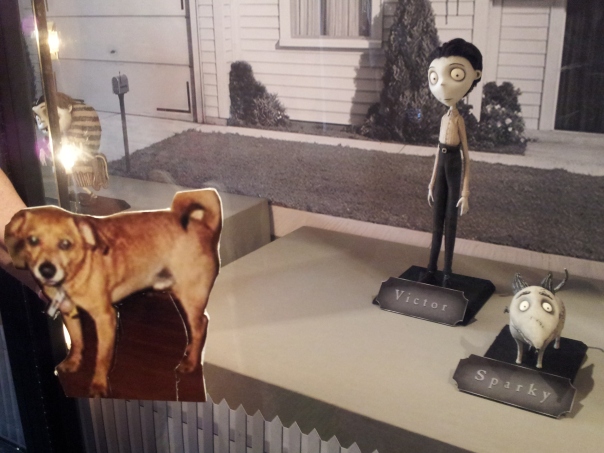 Some of the “stars” of Tim Burton’s FRANKENWEENIE